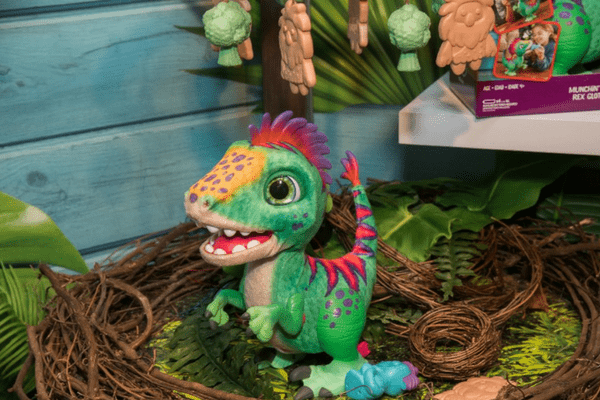 As of today, the brand “FurReal Friends” has become exceptionally popular because of the beautiful collection of toys they offer. Not only small children but also adults love these toys due to the unique appearance they possess. Up to now, their product line consisted of regular toys animals such as kitty cats, puppy dogs and bunny rabbits. Adding more value to their product line, FurReal Friends recently introduced a pretty different item called Munchin’ Rex. Although the term T-Rex doesn’t sound any cute at once, FurReal Friends’ Munchin’ Rex is something totally different than your imagination. If you can figure out the cutest T-Rex, that would be Munchin’ Rex from FurReal Friends.

Due to various reasons, any child will start to love Munchin’ Rex. However, before we look into the features of this product, it is better to know more about the manufacturers, FurReal Friends. In fact, FurReal Friends is not a stranger to toy industry; it is a distinct toy manufacturing division associated with Hasbro, Tiger Electronics and Dreamright Toys. FurReal Friends started its operation in 2002. This respective company has a reputation as a robotic toys manufacturer; as mentioned earlier, FurReal Friends were renowned for their cute kittens, puppies and bunnies and now, for this Munchin’ Rex. Some of the toys manufactured by FurReal are miniature-sized handheld ones and some of them are large enough for kids to ride. The prices of their toys range from a couple of bucks to few hundred dollars.

Now, it’s time to take a look at the most notable features associated with Munchin’ Rex. Just like the name suggests, Munchin’ Rex keeps munching on.

According to the product descriptions available, this product is suitable for kids who are older than 4 years. In fact, very small kids (who are younger than 3 years) may not be able to interact with Munchin’ Rex properly. in addition to that, the small components included in this package can cause choking hazard.

As mentioned before, this is a unique toy that resembles the appearance of a cute T-Rex. More importantly, it responds to your child’s taps. Just like the name suggests Munchin’ Rex claims to munch the special dino treats you provide; for instance, he will munch a broccoli or caveman snack provided. However, this cute dino is pretty unpredictable. Instead of munching, he may even spit out the treats you give him. However, he usually loves to slurp on the bottle. Well, don’t expect this cute looking Munchin’ Rex to show his table manners.

It will make random noises and movements; there are 35 sounds and movements for Munchin’ Rex to perform in front of you. In fact, despite his small size, Munchin’ Rex can deliver enormous fun to your child. For instance, even a wave can make him roar and bounce.

Now, you will wonder about his snacks, won’t you? This cute little Munchin’ Rex prefers to munch broccoli and a nice piece of meat. But, don’t worry; you don’t want to bother finding treats for your rex as he comes with a pack of treats. Although those treats are made out of plastics, they are good enough to create the idea. This is a good way to let the kids experience the exciting experience of feeding a dinosaur. In addition to the treats, this Munchin’ Rex comes with a little toy bottle too; whenever the cute little dino wants some milk, your child can use it.

As of this writing, Munchin’ Rex isn’t available in market. You cannot find Munchin’ Rex in any online store or a brick and mortar store until June 5th 2018. After the launch, however, we believe that this Munchin’ Rex will become a norm among the kids.

The concept of having a T-Rex as a pet may not sound cool until you see Hasbro’s Munchin’ Rex. This cute little T-rex can make any child excited. As an interactive toy, Munchin’ Rex can perform a variety of moves and sounds to make things even exciting. Apart from providing endless amount of fun, this miniature dinosaur can teach your kids about the pre-historic dining habits. If you are thinking of a good gift idea when you visit a little kid, Munchin’ Rex can be a cool choice.