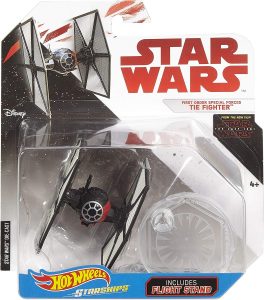 Star Wars movie sequel has gained extraordinary popularity ever since it is released back in the late 70s. In fact, Star Wars is known as one of the most popular and exciting movie sequels ever produced. Although the initial release took place some time ago, this particular movie keeps its fan base attracted firmly mainly because of the timely release of new episodes. The fan base of this movie sequel is only likely to grow as the younger generation to loves it very much. The characters, weapons and various types of spacecrafts featured in Star Wars are loved by the fans. Even the villains and their vehicles have become popular among the general public probably because of the unusual appearance and the excitements they deliver. As of today, the Star Wars fan base consists of both adults and kids. Many of these fans have made it a hobby to collect various objects that are inspired from Star Wars movie characters. Hot Wheels Star Wars First Order TIE Fighter Vehicle is such a product that comes as a part of a specific product line.

Hot Wheels have become really popular among those who admire small toy vehicles that are made using die-cast technology. As of today, they manufacture an extensive range of toys to resemble various iconic characters. Hot Wheels Star Wars series is such product line that consists of reimagined Star Wars characters and vehicles. Star Wars fans can use this line of product to express how much they admire the concept of Star Wars movie. Because of the finest detailing they have added, these reimagined toys make lovely collectible items. Hot Wheels Star Wars First Order TIE Fighter Vehicle is one of the most beautiful toy vehicles included in this line of products. In this writing, we will review Hot Wheels Star Wars First Order TIE Fighter Vehicle for your reference.

TIE fighter is a superb starfighter model that is used by First Order. This particular starfighter comes as a two-seater vehicle as opposed to the older TIE model. This powerful spacecraft comes with several weapons and sophisticated sensor systems to make it a completed battleship. In addition to that, TIE Fighter comes with hyperdrives and deflector shields. This strange-looking spacecraft is reserved for Special Forces of First Order. The bottom side of the vehicle has a turret with massive and potent laser cannons. In addition to that, a mag-pulse warhead launcher is mounted right below the main fuel reservoir. Because of the particular positioning of the turret and mag-pulse warhead launcher, TIE Fighter is capable of covering a complete a 360-degree angle and attack enemies from all the sides. It is true that the pilot can handle all the weapons mounted on this first spaceship. However, the turret mounted on the ship is controlled by a separate gunner who faces the rear side of the vessel. Because of the enabled hyperdrives, this fighter vehicle can go on more extended missions. Apart from that, this TIE Fighter vehicle is equipped with deflector shields combined with advanced cells to deliver more power. In general, TIE Fighters are highly versatile and powerful ships.

The combination of Hot Wheels and Star Wars has delivered an adorable toy that resembles the TIE Fighter. The detailing applied on this toy generates a beautiful appearance. The metallic color of the top matches perfectly with its source starship TIE Fighter. The event, the deflectors of the original TIE Fighter vehicle, are redesigned to match the small vehicle. It is manufactured maintaining a 1:64 scale so you can use it as a beautiful collectible item and display.

Here are some of the most significant features associated with a Hot Wheels Star Wars First Order TIE Fighter Vehicle.

This is an ideal collectible item for any Star Wars fan. It can also be used as a toy for kids.

Hot Wheels recommend this product for kids over 3.

Hot Wheels Star Wars First Order TIE Fighter Vehicle is a really cool value addition to your collectibles if you are a Star Wars fan. Moreover, you can consider it as a valuable gift for a kid who loves Star Wars. It is a nice-looking, well-detailed product that comes with a reasonable price tag.