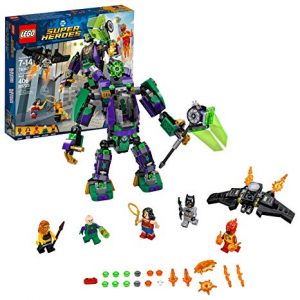 If you ever imagined to team up with your ever-loving Justice League heroes and take part in a mission, buy a Lego DC Super Heroes Lex Luthor Mech Takedown set. Just like the name suggests, this play set is inspired from the Justice League characters. With this playset, you can relive a scene that involves rescuing the Energy Infuser from Cheetah. You should get together with the heroes and assist them to accomplish this adventurous mission.

This buildable mech play set consists of an opening mini-figure escape pod and an adjustable rapid shooter with 6 studs. In addition to that, it has attachment points to hold 3 collectible energy infusers. It includes a Batman’s Bat-Glider that has 2 stud shooters and a buildable green energy infuser too. When it comes to the mini-figures, there are 5 of them to represent five different characters that appeared in the Justice League. You can customize this using the set of different translucent power burst elements (in orange color).

After building the Lex Luthor Mech with the escape pod provided, you can battle against the villains of the DC universe; you are not alone – there are superheroes by your side. We will emphasize these mini-figure characters in a different section of this article. As per the recommendations of the manufacturer, this product is suitable for kids between 7 to 14 years.

Now, let’s take a look at the accessories included in this Lego playset.

Each playset includes 5 well-detailed mini-figures: Lex Luthor, Wonder Woman, Batman in Rebirth bat-suit, Firestorm and Cheetah. The batman comes in Rebirth Bat-Suit which is a new feature added to Lego play sets since January 2018. All these mini-figures help you create scenes inspired by the Justice League.

Lex Luthor Mech comes with an opening mini-figure cockpit and posable legs, arms, and fingers. In addition to that, Lex Luthor Mech holds an adjustable rapid shooter with 6 studs. Moreover, it consists of a buildable ax and three points to hold collectible energy infusers. The escape pod is integrated with foldout wings too. You can place two detachable guns on this Mech escape pod.

Each Lex Luther Mech Takedown set includes 10 power burst elements. These elements appear in translucent orange color. With the assistance of these elements, you can customize the objects you build. In addition to that, they can be used to customize the mini-figures.

Bat-glider included in this playset has an attachment point to accommodate the Minifigure of the batman. In addition to that, it can provide two stud shooters and a pair of translucent orange elements that mimic lights.

Here are the most notable features associated with this Lego playset.

–    It lets you build the figure Lex Luthor Mech with the escape pod and team up with your favorite Justice League to fight against the bad guys from DC universe. When combined with various other accessories provided, you can expect the superb amount of joy and excitement.

–    Each play under this product model comes with 406 pieces in total. These pieces make it easy for you to create exciting battles.

–    According to the manufacturers, this Lego DC Super Heroes Playset is compatible with all the Lego building sets

–    Measurements of the main objects

When built entirely, Lex Luthor Mech model has a height of 7 inches (19 centimeters), length of 1.5 inches (5 centimeters) and a width of 4 inches (12 centimeters).

As per the descriptions provided by the manufacturers of this product, it is suitable for kids between 7 to 12 years. However, we believe that even an adult can use this product at least as a collectible item.

You can use this playset to relive the scenes associated with the Justice League. In addition to that, you can consider this product as a superb gift idea.

Lego DC Super Heroes Lex Luther Mech Takedown set is a product that is inspired by the Justice League. All the mini-figures are nicely detailed, and even the accessories are beautifully colored. Overall, it is a good playset that can attract any Lego fan.