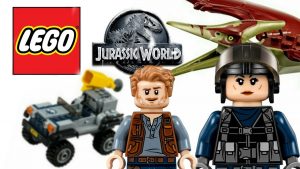 This playset presents Jurassic World’s main protagonist in the form of mini-figure. This playset aims to stage a scene that shows catching the pterosaur with a net. In addition to the mini-figures, each Lego Pteranodon Chase playset comes with several other accessories as well.

Let’s take a look at the key features associated with this Lego Pteranodon Chase playset.

–    It includes two mini-figures, a pterosaur, a jeep and several other accessories

–    The vehicle has a net shooter to capture the pterosaur

–    As per the product description, it is suitable for kids of 6-12 years

–    The Pteranodon come with wings and jaws that are moveable

–    They have included a dinosaur egg, a tranquilizer gun (with a yellow syringe) and a wrench as accessory elements

–    Measurements: High-speed off-road jeep comes with a height of 3 inches (8 centimeters), a length of 3.5 inches (10 centimeters) and a width of 2 inches (6 centimeters). The Pteranodon is about 1 inch (3 centimeters) tall.

Here’s a list of accessories included in Lego Pteranodon Chase.

As we mentioned before, this product comes with two mini-figures; Owen Grady and a female jeep driver. However, just like in Blue’s Helicopter pursuit (playset 75928), the details of Owen Grady is not that perfect. In other words, there is a considerable difference between the actual Owen Grady character and the mini-figure. In this mini-figure form, he appears with a tranquilizer gun to capture the pterosaur.

The other Minifigure is a female jeep driver who wears dark blue attire with a black utility vest (which is the standard uniform of the guards).

The Pterosaur figure included in this play set is not a new one; in fact, the same character was found in 2015 Jurassic World in addition to the Dino themes (2012). Although it is not new, the creature itself looks really nice, and we are glad that they didn’t change it.

The overall appearance of the vehicle is really nice. The design and details are pretty neat. To add more excitement, it comes with opening doors, and the wheel arches are contoured nicely. The pure shooter mounted on the back is something really cool. However, it was found in some other sets released in this year.

The only issue we have about this jeep is its scaling. Although it looks really nice and decent when placed alone, we find that the wheel arches are positioned above the head of the jeep driver. Practically, it can be pretty hard for her to get into the driver’s seat.

Having a functioning shooter is not so familiar for a Lego play set inspired by Jurassic World. The pure shooter included in this playset (which is mounted on the jeep) is capable of shooting the net as they have mentioned. However, the problem is that it cannot shoot the net that far. It can ‘shoot’ the net to a maximum distance of 15 centimeters. Still, the concept is excellent; after all, it is a miniature Lego playset.

As we mentioned, this product is manufactured with the inspiration of Jurassic World movie. So, what you can expect to do with this movie is to stage some scenes of the same film. With the accessories, objects and Minifigure characters included in this playset, you can stage a scene in which you capture the pterosaur using the net, pure shooter and tranquilizer gun with the assistance of Owen Brady and the jeep driver. Apart from playing with it, you can consider this playset as an excellent and affordable value addition to your Lego play set collection.

Even though this play set consists of a net shooter, you don’t have to worry about it. As we mentioned, it doesn’t shoot the net powerfully; it can shoot up to a maximum distance of 15 centimeters. However, you shouldn’t let toddlers handle this playset due to potential choking hazards. Overall, this is a safe play set for kids over 6 years.

This is the most affordable Jurassic-World-inspired playset released in 2018 as of this writing. The overall quality of the product and the details they have included in the objects and the characters are pretty impressive. It is an excellent gift idea too.