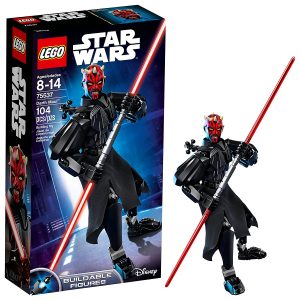 As a matter of fact, Darth Maul is ranked as one of the most charming characters found in the Star Wars series. Although this character is involved with a limited number of dialogues, the appearance itself of the character makes a huge difference. Darth Maul has an elegant presence in all the official images. It comes with a new shell over the top side of the arm. The head sculpt of this unique figure is really impressive. As we believe, Lego Star Wars Darth Maul is likely to be among the best buildable characters introduced by the Lego so far.

The height of the Darth Maul is 26 centimeters. That means, he is taller than most of the other buildable figures you will see in Lego Star Wars product line. However, when it comes to the movie, Darth Maul is a shorter figure. But, that doesn’t mean that Lego Star Wars Darth Maul has lost the proportion in the playset. So, having him in your playset and displaying him with the other characters is not an issue. This figure comes with ball joints at all the joints to perform more realistic moves with better versatility.

However, the motion of the neck is slightly restricted due to the added part located between his head and torso. But, this limited motion is not a huge issue compared to the aesthetic values added to the photo. What the head sculpts of this figure comes with complete detailing. The character has precise facial tattoos and tan horns in addition to the yellow color eyes. Interestingly, we notice a slight misalignment in the pupils of his eyes.

The robe he wears shows somewhat looseness particularly closer to the sleeves area. This respective characteristic appears slightly inflated in the film itself. The intricate texture and the slot you find at the top of the shoulders performs nicely. Because of this formation, you can move the joints easily.

Just like most of the other buildable figures, Darth Maul to is capable of moving the arms and legs to feature a more realistic appearance. The turning gear located in the backside of the model enables that you run the arms back and forth. That means, he can swing his weapon with a more realistic posture. Such functionality assures a substantial amount of fun and excitement to the user.

But, you may notice that the elbows of this character don’t bend. Therefore, it might be somewhat difficult for you to present a really dynamic pose. If you are concerned about the perfect poses of Darth Maul as you have seen in Star Wars Episode I (The Phantom Menace), you will find it somewhat frustrating. This particular product includes 8X back technic bushes (which were also present in the Darth Vader figure).

Here are the highlights of this particular product.

–    This playset can be used to recreate the figure of legendary Darth Maul that appears in Star Wars.

–    This figure, just like the other Star Wars figures, is perfectly compatible with different Lego sets.

–    One of the most attractive gift ideas you should consider when visiting a Lego Star Wars fan.

Lego Star Wars Darth Maul is available in most of the famous online stores including Amazon. You may find it in some of the leading retail stores as well.

The primary use of Lego Star Darth Maul is recreating your favorite scenes by combining it with other characters. Apart from that, it can be used as a collectible item if you are a fan of Lego Star Wars characters.

This individual product is best recommended for kids over 8 years. However, even an adult can use this product as a collectible item or a gift.

If you want to make your Lego Star Wars collection a complete one, this is a figure you shouldn’t avoid. It comes with subtle details and superb appearance to make you excited. It is a perfect gift idea or a collectible item for any Lego Star Wars fan.