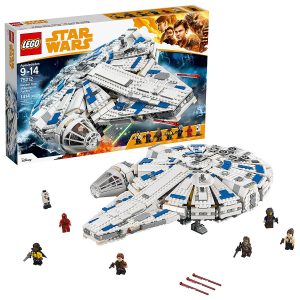 If you are a fan of Star Wars like millions of others, Millennium Falcon must be a very familiar artifact for you. World-renowned LEGO has generously recreated this beautiful piece of work under the brand name of Lego Star Wars Kessel Run Millennium Falcon. If you have ever fantasized travelling with Han Solo, his cute co-pilot Chewbacca and other friends, this Lego playset will be a perfect match.

Just like all the Lego products, their Star Wars Kessel Run Millennium Falcon comes with uncompromised quality. This artifact is manufactured to resemble the Correllian fighter craft that appears in Han Solo movie. In addition to the bricks that are used to build this fascinating space craft, the package includes various other accessories ranging from detachable canopy to a detachable escape craft. Altogether, this specific Lego playset comes as a combination of 1,414 pieces and that explains the amount of details this craft might contain once built completely.

Star Wars Kessel Run Millennium Falcon play set includes a set of flip up panels on top. This formation allows the players to access the interior of the ship easily and play with better enthusiasm. The mini figures included in the package can perfectly match the cockpit of Millennium Falcon. That allows you to create awesome scenes using Han Solo and Chewbacca.

Here’s a list of features associated with this beautiful playset.

When it comes to the accessories of Star Wars Kessel Run Millennium Falcon, it comes with 1,414 pieces in total. These accessories include top quality Lego bricks and 6 miniature figures that are unique to Star Wars series. Han Solo, Chewbacca, Qi’ra, Quay Tolsite, Lando Calrissian, DD-BD droid and a Kessel Operations Droid are those mini figures included in this Lego play set. These figures can let you play Star Wars with more realistic feeling.

Since you can open up the hull plates, it is possible for you to see the detailed interior and have more fun. You can see that the miniature figures of Han Solo and his co-pilot Chewbacca can be placed in the cockpit space perfectly and play your favorite Han Solo movie scene.

In addition to that, the accessories like detachable canopy, spring loaded shooters, sensor dish, rotatable laser turrets that are placed at the top and the bottom of this ship and escape craft can be exceptionally exciting for any Han Solo movie fan.

According to the product descriptions provided by the manufacturers, Star Wars Kessel Run Millennium Falcon is suitable for kids of age 9 – 14. However, even an adult Star Wars fan will find this product to be exceptionally exciting due to the nice appearance and the features it possesses.

This is an awesome playset manufactured by the world-renowned Lego. The purpose of this product is to provide enormous amount of fun to the Star Wars fans across the globe. With this play set, Star Wars fans can recreate the movie scenes of Han Solo.

If you are a Star Wars fan, Star Wars Kessel Run Millennium Falcon must be a play set that can fascinate you. Obviously, this Lego play set is a wonderful gift idea if you visit a young kid. Although it is recommended for kids of age 9 – 14, even the adults can consider including this play set in their memorabilia.