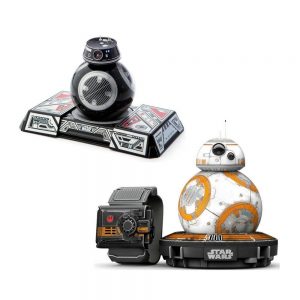 If you haven’t heard about the Star Wars film series, you probably are out of touch with the real world. In other words, Star Wars is definitely among the most popular movies ever released in the world. One of the specialties associated with Star Wars movies is that the number of characters features. Characters like Luke Skywalker, Han Solo, Chewbacca, Yoda, R2-D2 and many others have fans of all ages. BB-8 is another super-cute, admirable character that is loved by millions already.

BB-8 is the well-known, admirable spherical droid that appears in Star Wars VII (The Force Awakens). This beautiful droid figure was able to captivate our hearts from the moment it looked on screen back in 2015. BB-8 comes with the same type of confidence of R2-D2 we are familiar with. However, BB-8 has a unique design that features better portability and impressively advances technology compared to R2-D2.

This Star Wars Sphero BB-8 and Force Band are designed to be compatible with the original Star Wars accents. The Force Band included in this package perfectly fits on your wrists. It enables you to boost your natural Force powers and enjoy the best of Star Wars concept.

You can take the fullest control of the BB-8 Droid just like a Jedi Knight. This App Enabled Droid works like a charm. All you need to do is to wave your hand. It is smart enough to recognize the movement of your hand mainly because of the Force Band you wear. You can learn all the moves to control the Droid pretty fast. Force push and pull are such moves you can learn. Once you have learned Force push and pulled, you will be able to advance to the next levels and explore the other movements as well. You can use the band to complete your combat sessions to match weapons like Lightsabers, Blasters, and Force.

The Force Band works perfectly with the BB-8 (the Droid that operates based on a specially designed app). It is also compatible with other Sphero robots that work based on Bluetooth Smart.

As you may already know, this excellent product comes with several features to impress the users. Here are some of the most notable features for your reference.

–    It features a seamless droid control including Force push and pulls. The power can be done merely by waving your hand wearing the Force Band.

–    With Force Training, you can sharpen your lightsaber skills. That is by responding to cues of BB-8.

–    When it comes to combat training, you can use the imagination and creativity to play with a lightsaber, blaster, and Force.

–    You can find hidden supplies using the Force awareness through the resistance appear in the real world. The app will help you collect these supplies.

–    You can use this Force Band to control other Sphero robots that are powered by Bluetooth SMART.

–    You can quickly expand the Jedi powers and use them in the real world. You can live in the concept of Star World supply by controlling the connected objects around you using the Force Band.

–    The BB-8 comes with the ability to withstand resistant.

–    You can move the Droid efficiently using a smart device like the tablet or a smartphone.

–    The cute little Droid is quick enough to react to your voice.

Bluetooth Smart Technology supports a smooth operation. The Droid is capable of operating up to 60 minutes upon a single charge. It can be charged using a USB cable and therefore, you don’t need to worry much about its operation. It works perfectly within a 25-meter circumstance. Upgradable firmware and audio. It also comes with gesture detection feature thanks to the gyroscope and accelerometers. This respective device works with both Android and iOS platforms. Their app (Force Band – Sphero) can be downloaded through iTunes and Google Play Store.

–    It has an induction charging base

Star Wars Sphero BB-8 and Force Band are best recommended for those who are above 8 years. Kids smaller than 8 will find it somewhat difficult to handle the movements and take the fullest control of the Droid.

Star Wars Sphero BB-8 and Force Band are generally safe to use. It doesn’t have any sharp edges or other dangerous aspects. However, young kids should seek the assistance of an adult when charging the device.

In general, Star Wars Sphero BB-8 and Force Band is a very innovative and exciting product that assure decent value for the money you spend. Moreover, it is a great gift idea if you visit a Star War enthusiastic kid.