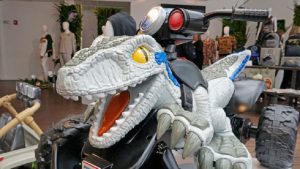 According to the sources, this product will be available in stores probably during this Spring prior to the initial release of the next Jurassic World movie (Jurassic World: Fallen Kingdom). This awesome looking quadricycle comes with off-road wheels in order to let the kids ride on uneven terrains without any trouble. The kid will find this Power Wheels Jurassic World Dino Racer to be really exciting because of the appearance, features and performance.

This Power Wheels Jurassic World Dino Racer can be ridden at a maximum speed of 6 miles per hour. In addition to that, it has a reverse speed of 3 miler per hours. However, as a parent, if you need to limit the speed of this quadricycle (particularly for the extreme-beginner level kids), you can do so with the assistance of parental control feature.

As mentioned before, we expect to see this product in the stores before 22 June. This product comes with a $260 price tag and as we believe, $260 is a pretty reasonable price for a quality quadricycle that matches outdoor terrains. This awesome toy can tolerate up to 65 pounds of weight; if you are an adult who loves to ride a dino-themed quadricycle, 65-pound weight limit will disappoint you for sure.

Now, let’s take a look at the most notable features associated with this velociraptor-like quadricycle.

The obvious use of this Dino racer is riding. A kid who doesn’t weigh over 65 pounds can ride this toy on various outdoor terrains ranging from grass to paved walkways. Decent ground clearance of this toy will facilitate the rider to clear uneven terrains too.

Power Wheels Jurassic World Dino Racer is powered by a rechargeable battery. You don’t need to worry about fuel; the 12V battery it comes with can let the kids ride it smoothly. The details the manufacturers have added make it more like a real dinosaur to the delight of many kids. However, those who weigh over 65 pounds should stay away from this “KIDS’ TOY”.

The rider can simply press the pedal to make this Dino Racer go. Steering can be done using the handle bars provided. There are three buttons to control the ride; these buttons are assigned for highspeed, low speed and backward riding.

This product is a generally safe item as long as the kids don’t ride it on busy roads. Parents should keep a good eye on the rider particularly if the rider is an absolute beginner. However, thanks to the parent-controlled speed lock system on top of the maximum speed level of 6 miles per hour, Dino Race can be considered as a safe toy.

If you want this toy to last longer with its optimal performance, you should avoid overloading it with too much of weight (you shouldn’t allow two kids to ride it at once).

If you want your kids to experience the joy of an electric quadricycle’s ride and the excitement of been with a furious velociraptor, Power Wheels Jurassic World Dino Racer can be a nice option to consider. It can be a great gift idea to follow the upcoming launch of the Jurassic World: Fallen Kingdom.