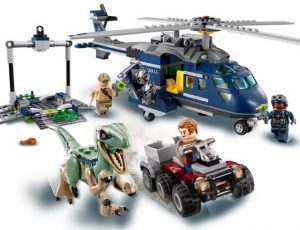 As per the product descriptions found through official sources, this Blue’s Helicopter Pursuit is designed to match a vital segment of the storyline of the Jurassic World: Fallen Kingdom, a much-anticipated movie in 2018. As they say, this play set helps you recreate a scene where you have to air transport a raptor through the air. Blue (the faithful Velociraptor) is trapped in a cage by Wheatley, and you have to rescue this friendly raptor and reunite it with Owen. Blue’s Helicopter Pursuit play set includes all the essential elements to create the air transportation scene.

Just as we expected, this set includes all the essentials to relive the scene from the Fallen Kingdom. The helicopter with rotating blades, dual, and a 6-stud shooter adds pure excitement to this plays set. In addition to that, there are plenty of other accessories to support this scene; we will discuss the accessories in a separate section of this article.

Here are some of the most notable features associated with Lego Blue’s helicopter Pursuit.

–    This play set comes with 3 excellent mini figures that represent 3 of the characters from the movie: Owen, Wheatley and a pilot to control the helicopter.

–    The helicopter comes as a fully functional device; it has rotating blades, a shooter, dual searchlights and a belly hook

–    Other accessories include a backpack, dinosaur tooth, an egg of a dinosaur and a chicken leg

–    The manufactures of this product recommend it for children over 7

–    The set includes a quad bike with a spare tire

–    The helicopter comes with a substantial size

As you may have already felt, this playset comes with a range of accessories to give you the best excitement of Jurassic World movie. In this section, we will list down some of the most notable elements and accessories included in this playset.

Owen Grady appears in this playset with a blue and shirt. On top of that, he wears a sleeveless jacket (leather). His legs and torso seem in a well-detailed manner. To make the mini-figures look more realistic one carries a stud shooting crossbow. However, you will notice that this mini-figure doesn’t look like the actual character (Chris Pratt).

Ken Wheatley appears in this playset with a not-so-friendly facial expression. Although he is not armed, he wears a shoulder belt which is filled with bullets. He carries a dinosaur tooth.

As the third mini-figure, they have included a pilot. This pilot wears a uniform of a guard which is familiar to all the other Jurassic World play sets.

This is the pivotal character of the playset as we see. Blue, the Velociraptor is considered to be a favorite character in the movie. Although all the other details are perfect with this reptile, we think that the color of his legs isn’t perfectly matching to the body.

This play set comes with an enclosure that is used to transport Blue. As we see, the fencing around the pen is proportionately too small to hold an animal like Blue. This cage can be lowered from the helicopter to load and unload the Velociraptor.

Compared to other helicopter models (that come in Lego playsets), this is a nicely-detailed product. The color scheme of this helicopter is pretty good. Many other details are added to this product to give a much better appearance. The blades of this helicopter rotate, and it comes with a 6-stud shooter.

The primary purpose of this product, as we mentioned, is recreating a pivotal scene in Jurassic World: Fallen Kingdom. If you are a Lego fan, you can consider this as a collectible too. If not, you can find it as a superb gift idea for a kid who loves both Lego and the movie Jurassic World.

This product is best recommended for kids of age 7-12.

If you wish to enhance your Lego collection with a nicely designed Jurassic World: Fallen Kingdom movie playset, here’s an excellent opportunity for you. Using this Lego Blue’s Helicopter Pursuit playset, you can create and relive a pivotal scene and enjoy the excitement. Although it is recommended for kids, even an adult Lego fan will find this product to be pretty exciting.