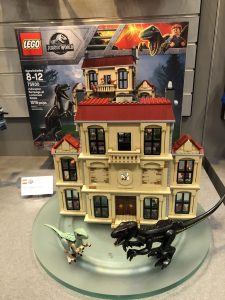 This is another Jurassic-World-inspired play set introduced by Lego. As per this play set’s theme, the user has to engage in an epic battle with dreadful dinosaurs. You should team up with Clair, Owen, and Blue (the dino-star velociraptor from Jurassic World move). Then, your team must battle against the hybrid version of the dinosaurs to rescue Maisie. This battle takes place based on a 3-story building. This building itself consists of segments like office, bedroom, a museum, laboratory and many others.

As per the recommendations of the manufacturers, this respective play set can be used by both girls and boys as long as they are older than 8. Altogether, it consists of 6 mini-figures in addition to the 2 dinosaur mini-figures; one Indoraptor (the hybrid version) and Blue (the velociraptor). Both of these dinosaurs – despite their contrasting characters and behaviors – can move their limbs, jaws, and heads accordingly. We will detail these mini-figures in a separate section of our article.

In addition to the mini-figures, this “Indoraptor Rampage at Lockwood Estate” play set comprises of various other accessories as well. An umbrella, a dinosaur egg, and an auction hammer are among these accessories.

Let’s take a look at the elements of this Lego playset.

–    This unique Jurassic-themed Lego play set is designed mainly for kids of 8-12 years.

–    In addition to the mini-figures, this product comes with an extensive range of accessories to create various scenes

–    As per the concept of this playset, you have to rescue Maisie from Indoraptor, the fearsome, hybrid dinosaur

–    Each dinosaur figure can move limbs, jaws, and head helping you to recreate the movie scenes in a lively manner

–    Although the initial guidance is provided, you can just build the Lockwood Estate building according to your own layout to provide more fun and excitement

–    You can activate the collapsing roof by merely pulling the lever

In addition to that, there are two figures to represent dinosaurs:

Both of these dinosaurs can move their limbs, heads, and jaws.

The three-story building (Lockwood Estate) itself comes with different segments. It has a bedroom (including a bed), an office, a laboratory, museum and more importantly, a collapsible roof. You can activate this collapsible roof by pulling a lever.

Other accessories include items such as an auction hammer, an umbrella, a buildable triceratops skull and an egg of a dinosaur. With the assistance of all these accessories and mini figures, you will be able to create an epic rescue mission and relive the real excitement of Jurassic World.

Since some of the accessories are pretty small, we strongly recommend you to adhere to the minimum age range instructions provided by the manufacturers and prevent choking hazards. Kids who are younger than 8 will find the building process to be somewhat complicated as well.

Here are the dimensions of the principal objects included in this Lego playset.

Well, the purpose of having this playset is to relive exciting scenes inspired by the movie Jurassic World. You can merely recreate that terrifying scene and sense the true excitement associated with a prehistoric giant. In addition to that, like with all the other Lego playsets, you can just add this product to your collectible set.

As per the instructions provided by the manufacturers, this product is suitable for kids of 8-12 years. Even though we don’t accept the maximum age limit, we couldn’t agree more with their minimum age; small particles can cause a choking hazard on little kids.

No matter whether you are an adult or a kid over 8, this Lego set can bring you a considerable amount of joy and excitement. You can recreate the scenes in Jurassic World and live in a prehistoric fantasy with this Lego set. Moreover, it is a brilliant gift idea.