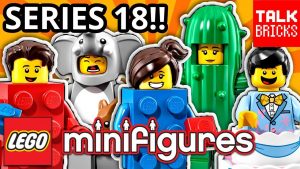 If you are a Lego fan who is looking for endless play possibilities, here’s an excellent choice for you. Lego Minifigures Series 18: Party is a play set that comes as a collection of celebratory mini figures to make you mesmerized. This collection of mini-figures comes according to a festive theme. All the characters included in this play set have bright colors and fine details. The characters are dressed brightly to make the playset more beautiful. Just like the name of this playset suggests, the figures are dressed as if they are ready to go to a party.

Although this is a pretty versatile playset, we believe that some Lego fans may not admire it. That is because that these characters are made based on the costumes. However, a majority of the Lego fans will like this set because of the versatility it brings.

The base plates of these mini figures come in orange color which is different from the standard black color base plates you might have seen. However, many people will be disappointed with the scarcity of the 60’s Policeman Figure (it is the chase figure for this Mini figure series).

–    Each mystery bag includes in this playset has one of the 17 characters of the playset. In this case, if you purchase multiple mystery bags, you may receive 2 or more identical characters.

–    Lego Minifigures Series 18: Party is a cool playset that lets you create the endless amount of adventurous scenes.

–    Each and every mini figure included in this new Lego series has at least one accessory element. In addition to that, each set consists of a collector’s leaflet and a display base plate.

–    Each character in this series comes with Lego Brick costume torso. It works as a real brick too.

–    As per the recommendation of the manufacturer, this product is suitable for kids those who are at least 5 years old.

–    Base plates of this Lego set come in orange color (as opposed to the conventional black color base plate).

–    Each play set offers the endless amount of playing opportunities

–    You can consider trading the mini figures you collect and make your collection a complete one.

Here is a brief description of the mini figures included in this Lego playset.

The purpose of this elegantly sculpted play set is to let you play the endless number of scenes according to a party theme. This particular product can also be used as an excellent collectible item. You can trade the figures with your friends to complete your collection and so on.

Lego Minifigures Series 18 is recommended for kids over 5 years.

Although some Lego fans may not like the costume concept, most of the Lego fans will love this product. It is a gift idea and a collectible item even if you are an adult.