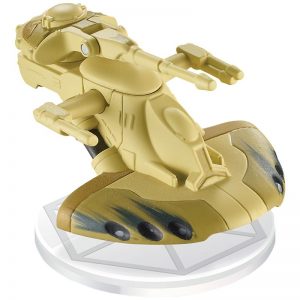 *Note: This toy is hard to find. I’ve set the “Best Price” box to search Amazon. Hopefully it will be available at Christmas.

Being one of the most popular science fiction movies ever made in the history, Star Wars features a broad range of characters, weapons, and vehicles. The popularity of the Star Wars movies considerably depends on the performance of their roles. The clashes take place between the heroes and villains are the core of the story of the Star Wars. Both heroes and villains of Star Wars have become immensely popular among the fans. Although the concept of Star Wars is introduced a couple of decades ago, the popularity if this movie tends to grow thanks to the new episodes that were released promptly. As a result of the demand for the Star Wars movie and the characters, the modern-day market is filled with a range of “Star Wars related” products. Many Star Wars fans tend to collect these items to celebrate their loyalty and passion towards the movie and the characters. The purpose of this review is to emphasize the features associated with one of such toys; Hot Wheels Star Wards AAT Battle Tank.

Hot Wheels, as you may already know, is an industry giant when it comes to toy manufacturing. Over the past period, they have introduced a broad range of toys to represent various characters. They have now got together with Star Wars to provide you with a variety of products to portray the characters and iconic vehicles featured in Star Wars movies. Hot Wheels Star Wars character-inspired vehicles is a unique set of vehicles that guarantee a beautiful overall appearance, complete detailing, and excellent value for the price you pay. The product we are going to review here is yet another valuable addition to their unique set of toys; Hot Wheels Star Wars AAT Battle Tank. Let’s get to know the features of this beautiful toy that resembles the AAT Battle Tank featured in Star Wars movie.

AAT is the shortened form for Armored Assault Tank. It is also known as the AAT- Hover. In simplest terms, AAT Battle Tank is an artillery craft. This vehicle is used by Trade Federation earlier. Later on, it was obtained by the Confederacy of Independent Systems as a donation. It soon became the main strength of their defensive line, particularly during the Clone Wars. AATs that were used by the Confederacy comes with the unique color scheme that represents the Confederation. However, some of the tanks still appear in tan color which symbolizes the Trade Federation. At the end of the Clone Wars, many AAT Battle Tanks were captured by the Alliance. These tanks were then modified further to provide more space for organic crews. A pilot should be there to control the tank. However, the main cannon is controlled separately by the respective commander of the tank. The primary weapon of the AAT is a massive and powerful laser cannon. It is powerful enough to destroy the walkers of Republic AT-TE.

Hot Wheels Star Wars AAT Battle Tank is made to resemble the appearance the powerful AAT in Star Wars movie. This individual product comes with a nicely detailed presentation. This product comes in tan color, so it represents the original tanks of Trade Federation (before donating to Confederation). Details like turrets and headlamps of the containers are emphasized correctly to give a more realistic feeling. This particular product also comes with a flight stand so you can display the item you purchase nicely. It makes a superb collectible item if you are a fan of Star Wars.

–    It is made maintaining the scale of 1:64 and that makes the displaying process simple

You can use this Hot Wheels Star Wars AAT Battle Tank as a nice collectible item. This product can also be used as a toy to recreate various scenes inspired from Star Wars movie.

This product is best recommended for kids over 4 years.

As of this writing, we were able to see this product in leading online stores.