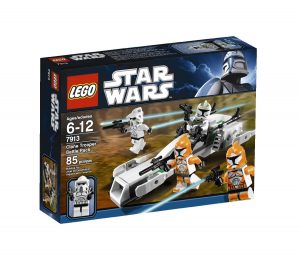 Lego Star Wars Jedi and Clone Troopers Battle Pack comprise of a pair of Phase I Clone Troopers. These two mini-figures previously existed in another set that was introduced back in 2013. The appearance of these two characters is pretty much the same compared to their 2013 version. Both the clones come with arms (they have stud shooters). In addition to the Clones, there is another pair – A pair of Jedi. These two figures are named Ki-Adi Mundi and Barriss Offee. In fact, Ki-Adi Mundi is a favorite member of the Jedi compared to Barriss Offee. However, Barriss Offee appeared in three previous Lego sets before. The outfit of Barriss is not that common among the Jedi community. The character has a dark blue cloak and a hood. The actor expresses two emotions; anger and calmness by the tattoos on the face.

The Cerean Jedi comes with robes that are in brown and dark tan colors. The design of the outfit complements the theme of the movies. The sleeves and the metallic silver highlights add beautiful detailing to his outfit. Both the Jedi characters found in this playset hold blue lightsabers in their hands.

When it comes to the battleship of this playset, it is a very unique, newer and a never-seen-before warship. You cannot see this vehicle in any Star Wars movie. However, it comes with a very nice color combination (a combination of white and red with some lime green mix). This module consists of two stud shooters as well. These two shooters are mounted at the front of the craft. In addition to that, in the cockpit, there is enough space for a pilot character to sit. The frontage of the cockpit comes with an aerodynamically designed shape.

However, you don’t find any controls in the cockpit, and that gives an incomplete feeling. Nevertheless, the model is sturdy enough and therefore, you can play with it confidently. It has two sliders at the bottom, so the craft appears to slightly hover over the ground level even when it is landed.

The rear of the craft consists of a wheel hub that appears in grey color. Although it is a favorite design, it doesn’t ruin the overall value of the product. The wings of the craft are attached to the body utilizing click hinges. Because of the use of these hinges, you can adjust the ability of the wings. Also, the rotating laser cannons make it a beautiful battle craft.

Here are some of the characteristics associated with this playset.

–    It comes as a complete set that includes several characters

–    The central aspect of the playset is the battle craft

The primary purpose of this remarkable battle pack is to play the favorite scenes of the Star Wars movie. However, this individual product is more suitable to recreate the scenes of the Prequel Trilogy. The lightsabers and other weapons included in this playset can add full of excitement. The battle craft itself consists of some good weapons to make it a more powerful force. Apart from playing the favorite scenes, this individual product can be considered as a nice collectible item too. If you are visiting a Lego Star Wars fan, this can be a superb gift item.

This individual product comes with several accessories as mentioned below.

This product is more suitable for kids over 6. This is not recommended for kids younger than 3 because of potential choking hazards.

Lego Star Wars Jedi and Clone Troopers Battle Pack is a decent product that will be admired by Lego Star Wars fans. It is ideal as the gift item and a collectible item too.