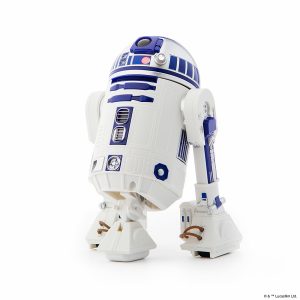 Star Wars is a favorite set of movies that are loved by pretty much everybody across the globe. Although the concept of Star Wars is a pretty old one, the popularity of Star Wars movies continues to grow steadily. As of today, both kids and adults contribute to the fan base of this science fiction movie. The characters found in Star Wars movies contribute significantly to its exceptional popularity over the past couple of decades. For instance, Han Solo, Chewbacca, Skywalker, and Yoda are such characters that mesmerize kids and adults alike. R2-D2 is an ever-loving character appears in this movie and Start Wars Sphero R2-D2 is a toy version of it. It is needless to mention that R2-D2 comes a massive fan base already.

If you are a fan of Droids, R2-D2 is a must-have product to include in your collection. As you may already know, R2-D2 is the droid that works for the rebels that come from a different galaxy far away. Sphero R2-D2 droid comes with an ultra-realistic appearance just like the original character appears in the movie. You can take the fullest control of this awesome droid using the smart device. If not, you can let it go on patrolling without your authority (it can move alone).

The signature front and the LED lights in the rear function perfectly. Apart from that, the integrated speaker of the R2-D2 generates sound unique to the original R2-D2 character.

R2-D2 is a starship mechanic that possesses excellent skills. More importantly, it plays the role of an assistant to the fighter pilot. R2-D2 has a broad range of features to interact and go on exploring. With this awesomely designed droid, you can recreate scenes like exploring the galaxy, walking through the starship interior and various other actions using augmented reality.

You can make this awesome droid to interact with various other Star Wars Droids (that are powered by apps). It also can be used to view films that were in the Star Wars saga. R2-D2 will react by your side. The realistic appearance and movements of this Start Wars Sphero R2-D2 droid are really admirable.

Like with other app-enabled Sphero droid, Sphero R2-D2 comes with a range of other features. Let’s take a look at the most notable features associated with this particular product.

–    This beautiful figure features the genuine movement of R2-D2 character that appears in Star Wars movies. For instance, it can change its positions from bipod to tripod. Also, it can perform various other waddles to show the emotions.

–    You can make it interact with other app-enabled droids come under the Star Wars theme.

–    You can use it to view various films from Star Wars Saga having this droid by your side.

–    The genuine LEDs and signature front side of the Sphero R2-D2 comes in a fully functional mode.

–    Thanks to the integrated speaker, this separate product emits various beeps unique to the R2-D2 movie character.

–    Sphero R2-D2 works perfectly with both iOS and Android devices.

–    It has a durable and robust plastic shell to withstand regular wear and tear.

–    It features strong Bluetooth connection within a range of 100 feet.

Here are the things you get inside the package.

Although it doesn’t come with an extensive range of accessories, the amount of fun it delivers is impressive.

Star Wars Sphero R2-D2 droid is best recommended for kids older than 8 years. Those who are younger than that may find it somewhat difficult to control the droid perfectly. However, you don’t have to be a kid to play with this beautiful droid; even if you are an adult, you can have some great fun with it.

Star Wars Sphero R2-D2 Droid is generally safe for anybody to use. However, young kids should seek the assistance of an adult when charging the device to prevent the smallest chances of dangers.