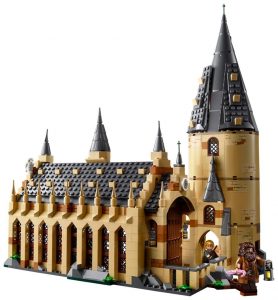 World renowned toy brand Lego launches a whole new series of play sets. These play sets are designed based on Harry Potter movies. According to the official sources of Lego, the first couple of play sets can be seen in the market since August 1st 2018. Lego Hogwarts Great Hall Set 75954 is among the pioneering play sets of this range; we are pretty sure that this product can become a norm among the LEGO play set lovers.

If truth to be told, LEGO Hogwarts sets are not new to the market; over the past period, we have seen many LEGO Hogwarts sets. Those play sets are available with different price tags and different quality materials. However, the product we emphasize here, Lego Hogwarts Great Hall Set 75954, is pretty different from the models we have seen so far. In many aspects, Lego Hogwarts Great Hall Set 75954 is better than all the other models we have seen so far. In fact, the quality of this model is impressive according to the information we have so far. This playset consists of 878 pieces and it will be priced around $100.

Now, let’s take a note about the most notable features associated with this nice LEGO play set.

What accessories does it have?

As mentioned earlier, Lego Hogwarts Great Hall Set 75954 consists of 878 pieces. More importantly, this play set consists of 10 characters that represents the characters of Harry Potter movie. Although they are really miniature in size, you are capable of giving the excitement associated with Harry Potter. These characters come with shorter legs; the wand they carry looks more realistic. The texture and the hair styles integrated to this product can surely impress the users. In fact, this respective play set combines the attractiveness and excitement associated with Harry Potter and Lego brands. The other accessories included in this product makes it a more detailed and complete product.

The characters come with Lego Hogwarts Great Hall Set 75954 comes with are as follows: Harry Potter (obvious), Draco Malfoy, Ron Weasley, Hermione Granger, and Susan Bones. All these characters wear their Hogwarts uniform. In addition to that, this play set includes other Hogwarts characters such as Professor McGonagall and Professor Quirrell. They haven’t forgotten Albus Dumbledore and that makes it a complete Harry Potter play set.

They have included a Lego first Nearly Headless Nick and a special Hagrid Figure who comes with a pink umbrella (and a lantern).

That’s not it, Lego Hogwarts Great Hall Set 75954 comes with various other animals and mythical creatures that appear in the movie itself. For instance, it has Dumbledore’s defender Fakwes the phoenix. Apart from that, it has Basilisk Snake, Hedwig and Ron Weasley’s pet.

The building itself is manufactured with two major components (the great hall and the tower). When it comes to the tower, the manufacturers haven’t forgotten to include the grand staircase too. Additionally, it has the treasure room and the potions room.

This product will be available in stores by August 2018. If you are a die-hard fan of Harry Potter and Lego, you will have to wait until August to purchase this product.

Of course, this is a play set and you can create various “Harry Potter related” scenes with it.

Lego Hogwarts Great Hall Set 75954 is a superb play set that comes as a forerunner of a new line of Lego play sets. This product will be available in stores by August 2018. Apart from purchasing the product for yourself, it can be a fantastic gift idea.