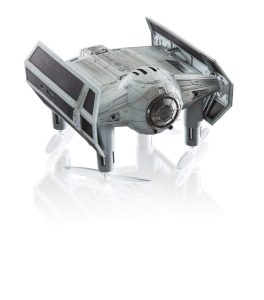 There is no doubt about the popularity of Star Wars. In fact, Star Wars is regarded to be one of the most popular movies ever released. It is true that Star Wars is an old concept that was first introduced back in 1977. However, the fan base of this awesome movie keeps growing at a steady pace. Star Wars, in fact, is a movie loved by both adults and kids alike. In other words, the fan base of this movie consists of both adults and kids. Chewbacca, Yoda, Skywalker, Han Solo, R2-D2 and many other memorable characters help increase the popularity of Star Wars. Some of the machines and equipment are seen in Star Wars movies and have become so popular among the public. Notably, their battle drones have become very popular among both kids and adults alike.

Star Wars Propel Battle Drones is a series of drones inspired by Star Wars movies. This respective line of products currently comprises three drones; Star Wars TIE Advanced X1, Star Wars 74-Z Speeder Bike and Star Wars T-65 X-Wing Starfighter. Although Millennium Falcon was supposed to be in this product line too, it is currently on hold as we know.

These drones come in a really miniature size. They possess lightweight characteristics too. These models are controlled using a remote control that operates under a 2.4GHz frequency. If necessary, you can pair this remote control unit with your smartphone device using a Bluetooth connection. More importantly, this connection supports both iOS and Android devices. The free app (Proper Star Wars Battle Drones) is compatible with iOS and Android devices. It runs live battle tracking and training simulations smoothly. If you like, you can take these Star Wars Propel Battle Drones outdoors and play instead of limiting your excitement to indoors.

These drones can travel at speed up to 35 MPH. When it comes to the distance, it can move hundreds of feet away from you. With the assistance of visible and infrared light emitters and sensors, these drones can battle creating a realistic scene.

One of the most unique (if not strangest) characteristics associated with Star Wars Propel Battle Drones is that they come in an ‘upside-down’ model. The propellers of these drones are placed at the bottom of the structure as opposed to the common designs we have seen. In other words, the propellers of these drones technically pull them upwards instead of pushing them. Manufacturers probably have used such design to upkeep the authentic appearance of the drones. However, we are not too sure if these ‘inverted’ propellers do any good or bad in the context of functionality.

Thanks to the barely visible propellers (which are transparent), you will be able to live in the fantasy with more realistic feeling. Such appearance helps to create the image as if you are taking control of a real Star Wars ship. If truth to be told, conventional drones that are covered by a frame doesn’t create the most realistic and pleasant experience for Star Wars fans. So, this particular product emphasizes the perfect appearance you are looking for.

Since there are no propellers towards the upper part of the drone, the chances of damaging them when contacted with the ceiling are minimal. However, upon a crash, there is a more significant chance for damaged propellers; there is no guard to cover it. But, it is a good thing that they provide replacements during the first year.

Here are some of the main features associated with Star Wars Propel Battle Drones.

–    Perfect compatibility with smart devices such as iOS and Android devices.

–    These drones come with exceptionally detailed appearance to offer you the most realistic appearance.

–    The propellers are placed at the bottom of the structure to maintain an authentic presentation of the product.

–    You can use this particular product even in the outdoor environments.

–    The LED lights and infrared emitters can deliver the ultra-realistic experience.

–    Star Wars Propel Battle Drones can travel at a speed of 35MPH.

The propellers of the drones are placed at the bottom of the design instead of the top. If any of these drones come into contact with the ceiling, no damage will occur due to this design. However, upon a crash, the chances for injuries are more since there is no protection for the propellers.

This product is best recommended for kids over 8.

You can use this particular product to fight battles pretending that you are a Star Wars character.

This is an excellent source of fun and excitement for those who love drones and Star Wars. It offers a great overall value for the money you pay. However, it is always better if you can play with these Star Wars Propel Battle Drones in a very spacious place to minimize potential damages.